Ladies and Gentleman, let me introduce to you the new member of my 3AM crew:

Welcome to the fam, bro!

Quick "Fury"-sketch for Fury one from Vienna 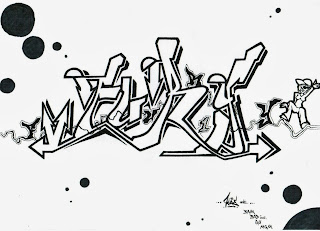 About 3 years ago my man Nar78, our buddy Funky and I had this thought of executing a concept which would cover the whole big wallside of our Hall of Fame. The idea was to put up our three styles once at the bottom of the wall with green fillin and red outlines and secondly three styles in red fillin and green outlines parallel at the top of it. Those styles where supposed to be connected by colorful vertical blocks stretching the whole length from the high to the low letterings, equipped with one or the other character.

This project ultimately expanded over 2 years as all of us couldn´t manage to get together for painting at the same time (exept the day we started it) because of jobs, private business, the weather... whatever! Also a large amound of material was needed and has to be organized one by one, and so the thing developed only step by step by either one or two of us until it came to an end in last years summer. And the funny thing about it is that it stood there unfinished over 2 years untouched just to be gone over at the bottom part a few days after been completed and before we could shoot good photos of the whole work.

At the moment I´m only able to present my finished green bottom style... with dragon character in progress... 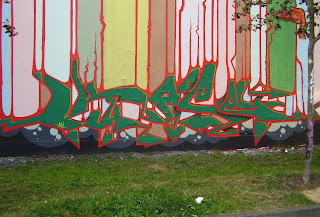 And once again another sunday production , this time in the upper area of the local Hall of Fame building

The East Hessian online news-page "osthessen-news.de" published an article about me some weeks ago where I gave some statements about my experiences in graffiti.
Watch it here

Photos where shot at a painting show during a party in my hometown. The finished piece came out like this: 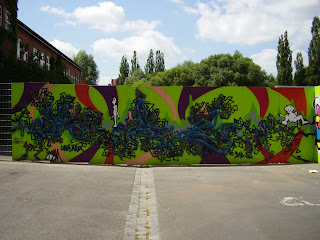 After heading to the north, the east and the south of Germany, of course the west shouldn´t come too short. Cologne was now the object of desire to represent. I´d been there for about two days with two goals in my mind: to take part in the "Nur die Vielfalt knallt"-Festival and to meet my crew mate Norm, who had moved there a while ago, and put out some nice production with him.

Saturday was the time to drive to the well known party location "Odonien" where a sweet little festival would take place. Beside the different party areas and the stage for the bands, it offered various all day long side attractions like a flea market, a not so serious casting show, a screen printing workshop and some more entertainment. Also a few walls where reserved for invited artists like me to express themselves. After the colors provided by the organizer were given to me, I went for it: 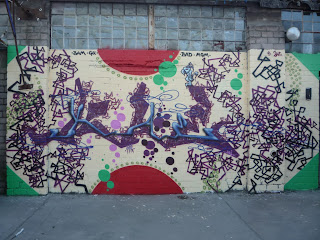 Day two of my trip took me to the big local Hall of Fame in Braunsfeld, a district of Cologne. My partner Norm was already there early and had coated the wall with some background. Like the day before, the summer heat was in full effect, and my sunburn was growing despite all cream. Here´s my part 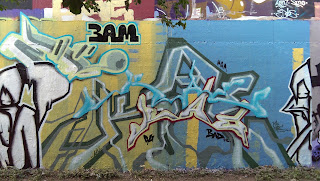 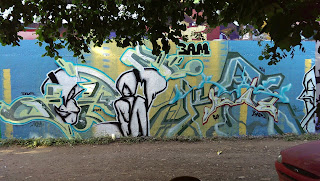 The next station on my journey through Germany was, like usually once a year, the Bavarian metropolis Munich where I hooked up with the local oldschool-hero Flin. Unfortunately all the time I was there the unstoppable rain poured down. So I chose to put my thing under a bridge at the city´s river "Isar" where I expected to stay dry. Because of the heavy rain in East Europe those days the river flooted the surroundings near the wall, but we were happy to get over and not to be forced to break off our mission. The bad thing there was that I couldn´t get some nice day fotos because the clouds set steady darkness at the location this day and I had to leave town the next morning. But when the flood will go back, I hope better fotos can be made if the water hasn´t destroyed the piece. So long you have to take this:


While  I´d been in Munich, my homebase was the artist and atelier community "Färberei", where the wall collage I´d posted some pages ago was still there. I was asked to put some new stuff up on it, and so I spend a cozy painting night shielded from the rain shower, refreshing my style by expanding it on the ceiling 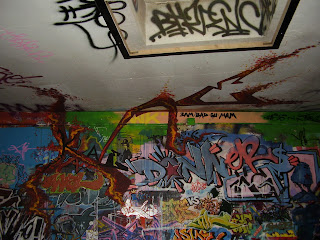 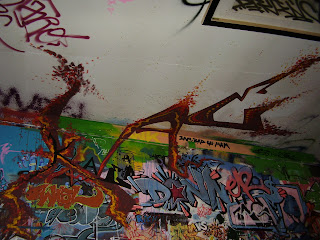 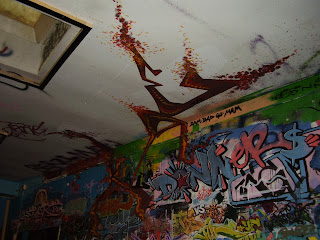 As I hadn´t visit the biggest and important German town since about five years now, it was high time to enter the train and ride it the 450 km to the capital. There was a mission to be fulfilled: The two German oldschool dudes Cemnoz and Crime wanted to celebrate the anniversary of 30 years of graffiti writing history in Germany.
This event was located at an old, abandoned radar station areal called "Teufelsberg" (Devil´s Mountain). During the cold war the US and British army where spying out the east zone from there. After the danger of a war was gone, they left the place and now it´s in private owning. But because of financial problems they can´t rehabilitate the buildings right now, and therefore it isn´t sure what the future will bring for the area.
Anyway, it gives the opportunity to use the structure for alternative projects, like we did now with our bags full of paint...
For this event I decided to choose a more erotic visualization and colors... 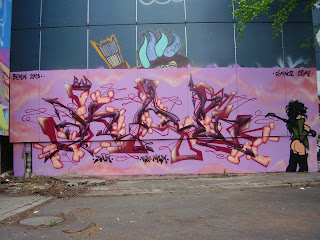